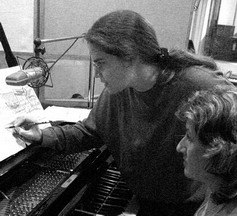 Since 1997 they are members of this duet with the name of Ondina as a tribute to this important cuban flutist.

They have made concerts at various concert halls in the country.  Their repertoire comprises works of all styles, including music of cuban composers, some specially composed for the duet.

They have been invited to record in the CD Música de Cámara (Chamber Music) of Master Jorge López Marín and at CD Leo Brouwer Homo Ludens. The duet has participated at events of chamber music in Cuba and sistematically performed concerts at the main concerts hall in the country.

The duet was invited to make a Concert at the Real Academia de Bellas Artes de San Fernando, Madrid, Spain in the award ceremony to Maestro Leo Brouwer who received from The General Society of Authors and Writers, (SGAE, in spanish) the 2010 Award "Premio Iberoamericano de la Música Tomás Luis de Victoria".

They are also invited to the Festival Leo Brouwer 2011, to be held in Sao Paolo and Maringá, Brasil.

See and listen at You Tube